I wonder how many of our readers will have heard of decumulation. The word is not (yet) in the Oxford English Dictionary, but it’s very much the current buzzword among financial advisors and retirement planners. It has a nice simple definition in the American Merriam-Webster Dictionary: disposal of something accumulated. In other words, it’s pretty much the opposite of accumulation.

In simplistic terms, retirement is the point in your life when you stop accumulating wealth, and start decumulating it. Before you retire, you steadily build up your wealth by saving and investing a portion of your earnings. This is the Accumulation phase. Once you’ve retired, your earnings cease, and you replace a portion of this lost income by gradually drawing down from your accumulated wealth. This is the decumulation phase.

The Shape Of The Accumulation-Decumulation Hill

This simplistic view ignores the state pension. It also ignores any defined benefit pension, if you have one. Also, it assumes that you don’t use any of your wealth to buy an annuity. But still, it’s useful to look at this simplistic view, as it forms a large part of many or most people’s retirement planning.

You might at first assume that the shape of the “hill”, representing a graph of your wealth over time, would be smooth. But because retirement is such a significant event, the hill has a different shape after retirement than before. Let’s assume fixed investment returns of 6% and fixed inflation of 3%. Let’s also assume post-retirement spending at a rate that will run out when you’re 100 years old. Then the shape of the hill looks like this: 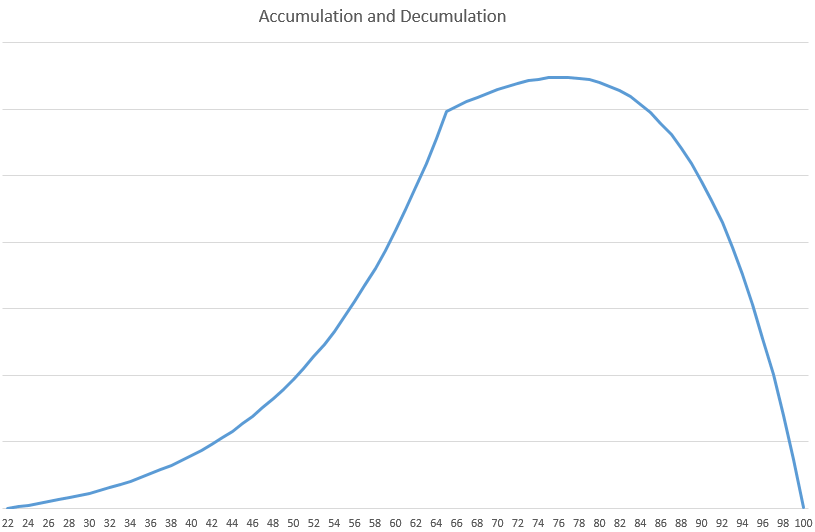 In reality, of course, it won’t be smooth, neither going up nor going down. Both investment returns and inflation will certainly fluctuate. Depending on this, money might be expected to run out before or after you reach 100. And of course you might not live to 100; or you might live even longer. But still, the shape of the hill gives us an idea of what to expect.

One thing that might surprise you about our graph is that total wealth increases for some years after retirement. This is because we’ve assumed that investment returns will outpace inflation, which is a reasonable assumption, though by no means guaranteed.

In our illustration, total wealth reverts back to the retirement level by age 84, after which it rapidly declines. When coupled with the uncertainties of investment returns, inflation and longevity, this eventual rapid decline makes retirement planning very difficult.

The shape of the hill in our example looks to me more like a huge wave, which is perhaps a rather scary thought. Adding in all the uncertainties would make the wave look frothy!

What about the state pension? This will reduce the rate at which you’ll need to draw down from your wealth, which will reduce your chances of running out of money. The shape of the hill (or wave) will be similar.

What if you have a defined benefit pension? This too will reduce the rate at which you draw down your wealth. If you’re lucky, it might even eliminate the need to draw down, which means that your wealth will have a chance to keep on growing until you die.

What if you decide to buy an annuity at retirement or at some later date? This will cause your wealth to suddenly drop. But because you now have added income, your reduced wealth should last longer.

How To Plan To Go Over The Hill

If we could predict the exact shape of the hill, planning would be easy. Because of the uncertainty, we need to reduce the risk of running out of money before we die to an acceptable level. If you have a generous defined benefit pension, this may be quite easy. For most people, it’s a dauntingly hard problem, and one that many people avoid confronting soon enough.

Our online retirement calculator is special. Even though it makes simplifying assumptions, these assumptions are not over-simplistic. Uncertainty is embraced, not avoided. Risk aversion is recognised as an important factor in decision making. And best of all, it doesn’t leave you to try out numerous decumulation strategies. It helps you to find the most sustainable one.

Going Over The Hill From Accumulation To Decumulation